Rumor: Nintendo Ready to Reveal Its Next Console at E3 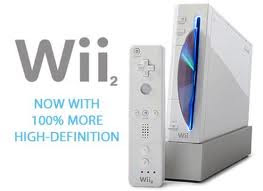 The rumors are flying today and they say that Nintendo is ready to pull the curtain on its next console. Game Informer has reported that they have heard from multiple sources that the next Nintendo console is being shown to publishers now and will have its first public unveiling at E3 with a plan to release it in late 2012. If the rumors are true, the new console will have HD visuals comparable to the Xbox 360 and PlayStation 3. This could mean it could have a little bit less power or it could be superior which will most likely be the case. One source has said "Nintendo is doing this one right. It's not a gimmick like th Wii." This could mean many things. Also, the rumored May 15 price drop bringing the Wii down to $149.99 could also be a sign that Nintendo wants to maximize the Wii audience before the new console arrives. You can check out the Game Informer article here

I personally think that this report is legitimate. It is about time that Nintendo talks about their next console. The HD consoles may be on a 10 year timeline but the Wii is probably not capable of keeping up after 4.5 years on the market. The next console needs to be more than just an Nintendo HD system. Knowing Nintendo, I'm sure they are working to make this console different than anything anyone has seen before. The only hope is that third parties will support it, especially if Nintendo is coming to them this early. I believe Nintendo will talk about the new console at E3 but will not reveal much. They might talk about a philosophy behind the idea of the system as well as system specs but that will most likely be about it. Don't expect software announcements and even if any software is announced, take it with a grain of salt. Back at E3 2005 when Nintendo revealed the first information on Wii or Codename Revolution at the time, Nintendo president Satoru Iwata announced that a new Super Smash Bros. game will come out for the launch of Wii in 2006 but we didn't see Super Smash Bros. Brawl until 2008. If revealed at E3, we will not hear the first information on the control methods or specific features and software until most likely Fall 2011 around the time the Tokyo Game Show is happening at earliest.

You misspelled the word "the"