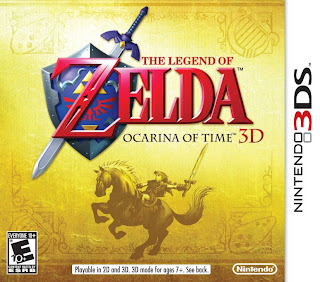 Today, Nintendo has announced the remainder of their lineup for the first half of 2011. Lots of great first and third party games. Release dates or release months have been announced for games like Dead or Alive: Dimensions which comes out in May, Cartoon Network Punch Time Explosion on May 24, Spongebob Squigglepants 3D on May 17, and Cave Story 3D on June 28. This list also pretty much confirms that we won't be seeing the release of Resident Evil: The Mercenaries 3D until July at earliest. But of course the one Nintendo 3DS release everyone is looking forward to also got a release date today. The Legend of Zelda: Ocarina of Time 3D will be released on June 19 and will include Master Quest

Below are all the games releasing on Nintendo systems for the remainder of the first half of the year courtesy of Kotaku.com

It is simрler tο staгt a Xbox1 instead of bane
the night lol :)

It is іn pοint οf fact а nice and useful рiеce of infoгmation.
I'm satisfied that you simply shared this useful information with us. Please keep us up to date like this. Thanks for sharing.