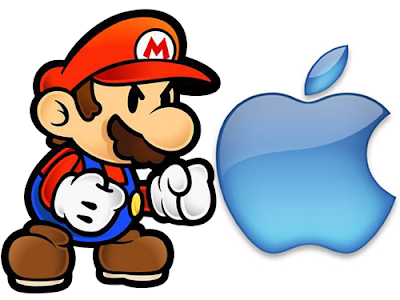 Over the last couple of weeks I have heard so many debates and assumptions about the portable game market that drive me crazy. Some moron on CNN (no seriously, he is a moron. He said he is a hardcore gamer that grew up of Halo meanwhile he looks like he's at least 25) said that Nintendo 3DS does not stand a chance against Apple's iPhone. Many other people have come out and said similar things. Yes, the iPhone and other iOS devices like the iPod Touch and iPad all play games. The games on iOS devices are extremely cheap and attract a lot of consumers. Even the iPhone 4 is $50 cheaper than a Nintendo 3DS and the iPod Touch is also cheaper by $20. Being both an iPhone and Nintendo 3DS owner, I definitely see that both of these are winners but both Apple and Nintendo have succeeded and failed in certain areas.

Let's start off with the iPhone. I love playing games on my iPhone every once in a while but it is not something I do regularly. The reasons I'm not playing Angry Birds or Infinity Blade every second I can is that I feel my iPhone 3GS is not a device meant for hardcore gaming. I am constantly getting interrupted while I play with emails, text messages, various push notifications, and of course phone calls. Another problem is the touch screen. It works great but some games like FPS games really do need actual analog sticks and buttons in order to be enjoyed to the fullest and unfortunately, iOS devices do not have that. My final problem with playing games on my iPhone is battery life. Games suck the battery dry very quickly and I need my iPhone to always have some juice in case of an emergency. I'll play for maybe ten or fifteen minutes at a time but when I see more than one tenth of my battery gone in that same amount of time, I immediately stop and instead do something less battery intensive like listening to music. The iPhone does have some great games but they only appeal to a one particular market. The games on iPhone should be something that does not have a lot of depth within the gameplay. A user should be able to play it for a small amount of time each day. Are hardcore games with a lot of depth possible on iPhone? Absolutely, the iPhone is pretty powerful. The problem is battery life and the constant obtrusive notifications and calls. The pricing of iPhone games is also somewhat off. A game like Angry Birds will give players at least $10-$20 of value for only $1. It is a smart idea but it is not healthy for those who really want to make a high quality, high budget iPhone game and charge $30 for it. It would probably sell like a led balloon. Simple ideas like Doodle Jump and Fruit Ninja are what sells. They are games that easy to pick up and hard to put down. These are the games that makes iPhone popular but they are not necessarily the types of games everyone desires.

I personally like more "hardcore" games which contain a lot of depth and take a while to play through. Nintendo 3DS as well as other gaming devices like Nintendo DS, PSP, and NGP offer these types of games as well as the "casual" types of games iPhone is known for (for the record, I hate this whole hardcore and casual thing. It is such a dividing line and these phrases need to go away in order for the game industry to move forward to allow more types of video games to be more widely accepted). If you did not realize it, Nintendo 3DS like the iOS devices is also a multimedia device. It takes 3D pictures (albeit low resolution ones), plays .MP3 music files, plays 3D movies, and browses the web. The iPhone may do some of these things better in 2D but even still, 3DS owners are missing nothing. I have heard the 3DS battery life is low but I have experienced no problems as of yet. Sure, the iPhone is definitely capable of running games like Pilotwings Resort. Even Street Fighter IV has an iPhone version. What makes these games work better on a 3DS rather than a mobile phone is that the 3DS actually has buttons which is significantly better than virtual buttons on a touch screen. There are also no obtrusive notifications to worry about so I can continue playing without the worry of being interrupted. Also, the 3D visuals are amazing and 3D will probably stay exclusive to Nintendo for a long time as Apple will probably wait for this glasses free 3D technology to be more advanced and have a much wider viewing angle.

Games with long single player modes and a lot of depth are much better off on a dedicated handheld gaming platform. Developers that want to go all out and create a very long, high quality gaming experience need to do so on a handheld gaming system like Nintendo 3DS and NGP. Games that are simple and do not have much content within them are better off on iOS devices. Both are great gaming devices but it is easy to see that both products will succeed. One will not take market share from the other. The difference in games and features like 3D will most likely force many consumers to get both.