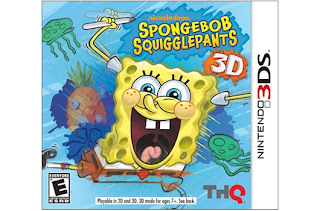 As I had posted yesterday, a Spongebob game known as Spongebob Squigglepants will hit the Nintendo 3DS this May after its appearance on uDraw for Wii this April. The game will have nanogames similar to WaroWare's microgames. I had the opportunity through THQ to get some questions answered about how the developers are handling the 3D effect of this game and here is what they had to say:

Q: How important was the stereoscopic 3D in Spongebob Squigglepants' development?
A: The 3D look is important to get a the full effect visually, but it is not necessary for gameplay. In fact the game is designed so you can play it without 3D without penalty.

Q: Is all of the gameplay in 3D and are the live action cut scenes in 3D as well?
A: We were careful to balance what was shown in 3D and what wasn’t. After evaluating the project, we felt restricting the 3D to the games/artwork felt more cohesive, so we made the Patchy and Potty sequences play without 3D.

Spongebob Squigglepants 3D will release on Nintendo 3DS this May. Stay tuned to the GamersCast News Feed for more information on all your most anticipated games.