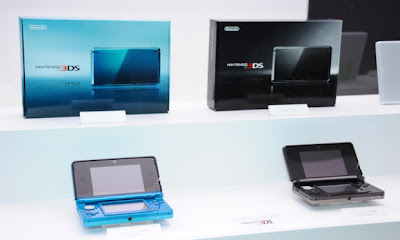 As most of you already know, Nintendo held their long awaited launch event on Nintendo 3DS this week. Although we will be discussing this on a future episode of GamersCast Podcast, I wanted to give my thoughts ahead of time.

As it was announced, the Nintendo 3DS will release on March 27 for $249.99. Many people are saying that this price is ridiculous. It costs as much as the Wii did at launch and its $100 more than what Nintendo DS costed when it released in 2004. I say that this price is actually reasonable. My original prediction was $250 with some software pack in and I was totally right. The Nintendo 3DS comes with tons of pre loaded software like the Mii Maker, Face Raiders, and more. It even comes with six augmented reality cards. Even if you don't pick up a game at launch, there will still be some great stuff to do right out of the box.

While the price is good, the launch titles do not appeal to me at all. It is very clear that Nintendo rushed the 3DS to market after seeing sales rapidly decline for both Wii and DS. No 3D video content, web browser, or eStore at launch is definitely disappointing. The launch games in terms of third parties are the usual suspects like Madden NFL Football, Super Monkey Ball, Asphalt, Ridge Racer Rayman, and more. The launch games with the exception of a few are probably rushed titles looking to cash in. That does not mean that they will be bad. A few titles like Resident Evil: The Mercenaries 3D, Dead or Alive: Dimensions and Super Street Fighter IV 3D Edition look great and really take advantage of the 3DS's features even through two of these three games are ports of console games. Nintendo's first party lineup easily looks like a rush job. Games like Nintendogs + Cats and Pilotwings Resort could easily be made in a little more than a year for a quick profit. Again, I'm not saying they are bad games. It's just that there are no great first party hardcore experiences at launch. Nintendo DS had Super Mario 64 DS while Wii had The Legend of Zelda: Twilight Princess. Although Nintendo GameCube did not have many standout hardcore titles, it did have WaveRace: Wave Runner and Luigi's Mansion. Only a couple of weeks later did Nintendo bring out the big guns with Pikmin and Super Smash Bros. Melee. Nintendo could have Nintendogs + Cats on launch day and then bring out The Legend of Zelda: Ocarina of Time 3D. Zelda was not confirmed as a launch window title but you never know what can happen.

The future for Nintendo 3DS looks bright but its launch window could suffer from a lack of great first party hardcore titles. Having a hardcore Nintendo title at launch would really increase the popularity of Nintendo 3DS. Many fans will probably wait until a Nintendo game they anticipate releases in order to put down the $250. Mario Kart, Paper Mario, and Kid Icarus are on the way but I guess it will have to wait while we are playing Pilotwings Resort along with the great 3rd party launch lineup. If you want the Nintendo 3DS now, I say its a great purchase but you better pre order now while you still can.