Shadows of the Damned Debuts at TGS 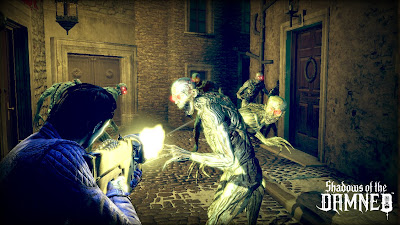 It was announced a while back that a huge collaboration between two renown Japanese developers was taking place. Suda 51 (No More Heroes) and Shinji Mikami (Resident Evil, Vanquish) announced a while back that they were collaborating on a game in the horror genre to be published by Electronic Arts. Today at EA's Tokyo Game Show press conference, that game was revealed. The game is called Shadows of the Damned. It is being developed by Suda 51's studio Grasshopper Manufacturer. Shadows of the Damned follows the story of a man named Garcia who must fight through hell to rescue his true love. Although the story may not sound so original, the art style shows how both of these prestigious developers collaborated. For the game's soundtrack, another man joins this insane collaboration. Akira Yamaoka who crafted the soundtrack for Silent Hill will work to make the music for Shadows of the Damned. David DeMartini, Senior Vice President and General Manager, EA Partners said that Shadows of the Damned is one of the most daring and innovative projects in the EA Partners program. This third person shooter will release in Summer 2011 for Xbox 360 and PlayStation 3. Check out the first trailer below.