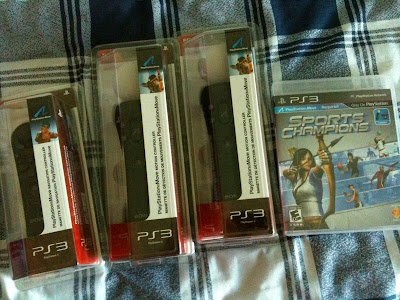 I thought setting up PlayStation Move would be challenging since I am setting it up in a small, cramped dorm room with the Eye camera below my TV and my TV at a low height. It turns out that everything worked out. I have to stand at the opposite end of my dorm room when doing things such as Archery in Sports Champions. Otherwise, the Eye camera definitely does a great job of capturing as much as possible in a room.

I first played through all of the games in Sports Champions. I LOVED archery with two Move controllers. It just feels so natural to pull the arrow and shoot. When playing Table Tennis, it felt so natural to hit the ball. The Move controller recorded my actions extremely accurately. I sometimes didn't realize I was using the Move controller and thought I was really playing with a paddle. I can't throw a Frisbee in real life and I can't throw one in Sports Champions either. Disc Golf is fun but a challenge. Multiplayer also worked well, even in a cramped space. I don't wanna say too much about Sports Champions in case I review it but it did offer a great experience with PlayStation Move and showed me just how accurate the motion controller really is.

A few other demos I played also showed me more about how PlayStation Move can change motion gaming. The Shoot really stands out when it comes to this. It takes the action of pointing and shooting to a new level by making you do things like a 360 degree spin to activate special abilities and even ducking to avoid enemy attacks. The Shoot was fun and fast paced. I was surprised by how many motion gestures are used and how all of them work perfectly together to create an amazing on rails experience. The Shoot was not a launch title but will be available this October. I would consider picking it up but it only includes five levels which may not seem like enough.

I then played a demo of Heavy Rain Move Edition. A patch for Heavy Rain will arrive this Wednesday, September 22 which will give Heavy Rain a PlayStation Move makeover. Overall, I thought the controls worked well. One scene I played that stood out was the fight between Scott Shelby and Lauren Winter's ex-client which is near the beginning of the game. The gestures were easy to pull off for the most part. Some things such as reaching into pockets felt incredibly awkward. Hopefully everything will feel normal in the final version.

The next demo I played is Tumble. I was surprised by just how accurately the controller was being tracked. It was super easy and natural to grab the blocks on screen and pile them onto each other. The game gets old fast unless piling blocks on top of each other is your type of game.

I then tried Kung-Fu Rider. This game was very fun but the controls at times felt unresponsive. I would try to boost by thrusting the controller forward and it took a few tries to get it. I don't think it would make a great retail game but the demo keeps me satisfied.

The final demo I tried was Start the Party. For this one, I played with three other friends and even though it was a short demo, we had a blast playing it. It was fun to see my friends on screen holding swords and tennis rackets. This game showed the potential of augmented reality and that future is looking really good.

Overall, I love PlayStation Move. It definitely is a better motion control experience than Wii. I had a blast playing many different games for it and games like Start the Party, The Shoot and Sports Champions prove that there is still innovating to do with motion controllers. The sky is the limit for developers to create amazing experiences with Move. Not only that but it seems like eventually many if not most games on PlayStation 3 will support PlayStation Move as an option of controlling each game. Buy a Move starter kit or Move controller today and see what true motion gaming with a controller is all about. True motion gaming without a controller may be seen this November with the launch of Kinect for Xbox 360 coming up. During that time, it will become clear what motion controls can do to enhance the experience amd PlayStation Move is definitely a large piece of the puzzle.