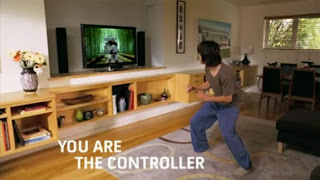 There has been so much buzz about Microsoft's new sensor known as Kinect for Xbox 360. Microsoft is hoping that this new accessory will bring a whole new audience to the console which means more sales and more money for Microsoft. One way Microsoft is doing this is putting Kinect demos in 13 Macy's stores across the United States until September as well as having a truck tour to different sites across the country until it's launch on November 4. While at my local mall, I noticed a Kinect demo station in Macy's buried deep within the back of part of the huge department store. I got to finally become the controller and get a peak at what the new sensor is capable of.

I played two different games, each one being very different from the other. The first game I played was Bowling, one of of the six sports in Kinect Sports, a launch title being developed by the famed development team Rare. I thought this would be similar to the bowling in Wii Sports but I was wrong. To grab a ball I actually had to reach my hand into the that cool device all the balls come out of to pick up a ball. To roll it down the lane, I just rolled it using the exact motions I would use when regularly bowling. I was not holding a remote in my hand. I was pretending to hold a ball. My fingers were curved on the imaginary ball in my hands. This actually felt more natural than holding a remote or wand. At first I kept using my right hand and ended up hitting the same area. The lady in charge of the demo station told me to switch hands. When I did, I was much more successful. I was able to even get a few strikes. By the time my game ended, I was able to really aim the ball where I wanted. What really shocked me was that bowling was a "full body experience". I thought I just had to stand still but I was wrong. I actually had to step to the side and I found the avatar on screen moving to different angles of the lane. I've never felt so connected to the screen. Just something as simple as having to actually take steps to one direction to move where I roll the ball just amazed me. It felt super realistic. By the end of my game I had even figured out how to curve the ball and aim it where I wanted. After one game of bowling on Kinect Sports, I am already convinced it is a better, more realistic experience than Wii Sports bowling which uses now inferior motion technology compared to Kinect's body capture technology. I am now even considering picking up Kinect Sports not just for bowling but for the other five sports including Soccer, Boxing, Track and Field, and more.

After my game of bowling ended the woman wearing a Kinect shirt who guided me as I played Kinect bowling immediately reset the Xbox 360 hiding behind the large TV. It turns out that Xbox 360 was a dev kit. She chose one of the files on the dev kit and a new game starts up. This time it is the River Rush minigame found in Kinect Adventures. I was already planning to pick this title up with my Kinect sensor so I could not wait to try it out. The game really did not work well but I think it was the environment. I was about two or three feet away from the TV and I could not step back otherwise I would crash into the cash register behind me. In the game, I had to lean my body to the left or right to steer the raft and jump to gain air as the raft moves off of a high ledge. The goal was make it to the end and collect coins. I had such problems leaning to the right. It just would not work. Everything else was fine. To jump, you do not even have to jump high. Just slightly bending my knees and moving them up worked fine but I did mostly jump. After it was done, I got to see pictures of myself playing. In the full game, those photos can be uploaded to Facebook. My photos were not very good but it was fun to see what I looked like as I played. I got a bronze medal but I'm sure if I were able to turn right better, I would have gotten a silver or gold medal.

After this, I got the idea of Kinect and I did not need to play anymore in order to convince me. Although the environment was not great for playing one of the games, I know that the games are not quite completed yet. It will most likely work better in small environments like the small dorm room I will be playing in when Kinect launches. Kinect is very cool and I am definitely going to purchase one at launch. Although I would wish for some hardcore titles at launch, casual games like Kinect Sports and Kinect Adventures will keep me satisfied until amazing titles like Star Wars release next year. Kinect probably works (I still have to see it at launch to make my final decision on that) and has so much potential to create games (hardcore games) that are just not possible with a controller.


New to GamersCast? Check out our official website here: http://www.gamerscastpodcast.com

Amiable brief and this enter helped me alot in my college assignement. Thanks you seeking your information.

[url=http://hairtyson.com]Phen375[/url] are tablets that resist slacken up on fuselage weight. The same of these tabs has to be captivated with drinking-water, round 20 minutes before a meal, twice a day.

[url=http://hairtyson.com]online Phen375[/url] are tablets that help slacken up on body weight. Everybody of these tabs has to be captivated with water, almost 20 minutes ahead of a meal, twice a day.

[url=http://www.payloansonline.com]payday advance[/url]
This is the best way to get all your health products online like green coffee, african mango, phen375 and others. Visit now