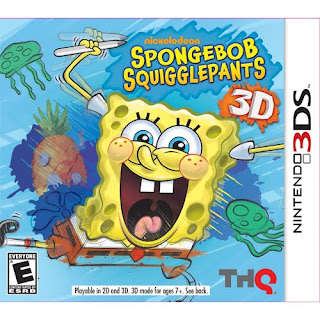 Spongbob Squarepants is easily the most popular children’s cartoon around. Just about every kid and even many adults watch Spongbob’s antics on Nickelodeon multiple times per week. Spongebob Squarepants video games are very popular and the newest one, Spongebob Squigglepants for the uDraw tablet on Wii and Nintendo 3DS is very different from any other Spongebob game around. Although for the most part, the two versions of the game are the same, the Nintendo 3DS version which I got to review also has an exclusive level aside from the addition of stereoscopic 3D. Is Spongebob Squigglepants a game that will entertain more than just younger gamers? Find out in my review.

Spongebob Squigglepants is basically WarioWare with Spongebob characters put into the mix. You go through microgames which are called nanogames and try your best to keep up as the nanogames as they become quicker and quicker. The nanogames take advantage of the Nintendo 3DS’s touch screen, accelerometer, and circle pad. Patchy the Pirate, the president of the Spongebob fan club acts as your guide as you unlock more microgames and extra minigames. Spongebob Squigglepants also has a drawing application built in which allows players to draw whatever they like and even save their creations to an SD card. 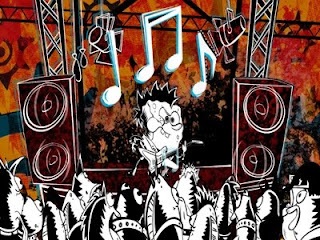 The game’s graphics are pretty much the same as the Wii version. The art style is very unique and different from any Spongebob game out there. You will be able to see your favorite Spongebob characters in ways you have never seen them before. It is all 2D but looks more like sketched drawings rather than like the cartoon. It’s kind of hard to explain unless you see screenshots or play the game. The 3D effect on Nintendo 3DS is incredibly subtle and just adds a little bit of depth to many of the nanogames. I would have liked to see a lot more effort with making the game 3D but it is clear that WayForward, the dev team that made the game did what they can. The 2D art style is meant more to be two dimensional but the layered look of the 3D works nicely with the 2D drawings. The cutscenes featuring Patchy the Pirate are all live action and in 2D but can sometimes look a bit pixelated. This is probably due to compressing the video files to fit on the 3DS game card. Although it probably would have taken some extra time and effort, a 3D conversion of the 2D live action cutscenes and the main menu could have been good for Spongebob Squigglepants. The soundtrack is very much like Warioware with stable tunes that let you know when you win and lose at microgames.

There are a lot of things I really like about Spongebob Squigglepants. I love that it is like Warioware and the game gets frantic and crazy. There are over 100 nanogames, each with their own themes and art style and each taking advantage of the 3DS’s touch screen, accelerometer, and circle pad. I love the 2D look of the game, simply because nobody has seen the Spongbob universe in the way it is portrayed in the game. The drawing studio is also great and kids will really have fun drawing with it since there really is not a way on the 3DS to draw pictures and save them to an SD card. 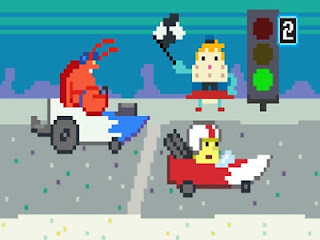 Spongebob Squigglepants also has plenty of flaws. I really had two major problems when playing it. The first is that the ideas for most of the nanogames were literally taken from Warioware. I’m glad it is in of the same genre but the fact that many of the nanogames are literally microgames from past Warioware titles with Spongebob characters in them really gets me annoyed. Copying something that’s great is not as good as an doing an original take. This in a way should be considered plagiarism. Those who have played Warioware games in the past might get annoyed with this. The next problem is that the game is way too short for most people. I played through the main story mode in an hour. Then, the game forces you to go through all the nanogames again just to unlock some more cut scenes. What’s great is that you can always challenge yourself to beat your high score but most gamers might consider themselves done with the game in just a couple of hours. In no way is Spongebob Squigglepants worth the $40 it’s asking for. It’s worth $15-$20 tops.

If you have not ever played a game like Spongebob Squigglepants and are someone who likes to compete for a high score, I would suggest looking into trying it out if you’re hungry for a new Nintendo 3DS game. I would not suggest picking it up at it’s current $39.99 price point. Finding it for cheap is great. Young kids will love the game. Adult gamers and Spongebob fans may find the game too short. If the game were worth a lot less, I would give it a higher score but I feel as if for being at times unoriginal and short, my final score is fair. This is by no means a bad game, it is just way too overpriced.

Special thanks to THQ for providing us with a copy of the game for review.

Howdy! I could have sworn I've visited this website before but
after going through many of the articles I realized it's new to me.
Regardless, I'm definitely delighted I stumbled upon it
and I'll be bookmarking it and checking back frequently!


Here is my weblog; http://wiki.msj.vic.edu.au/groups/2013year10japaneseunit9listening/wiki/406ef8/Exceeding_The_World_Of_Casual_Dating.html