A new generation of Pokemon has emerged for the Nintendo Ds. But will this last 2D adventure with a 3D perspective bid fond farewell to the system or simply be a repetitive pass?

The overall structure of the Pokemon RPG remains intact. You start as a kid in a small town with big ambitions receiving your first Pokemon from the local PokeProf. You’ll have the stock “Evil Team” to beat as usual, but unlike teams of the past, morality comes into question. The story won’t have you on the edge of your seat, but often you’ll find yourself contemplating the rights and relationships of Pokemon and you. This time around you’ll be filling your pokedex with 150 new creatures exclusively (before the National Dex). It’s amazingly refreshing to not have to spam through the same Rattatas and Zubats for the millionth time. Obscure Pokemon coupled with familiar mechanics, create a real drive to try and apply what you’ve learned in past generations to the current. Newcomers will find plenty of useful info from the townspeople and also from the newly added “Help” option found on Pcs at all Pokemon Centers.

Aside from help and healing, Pokemon Centers are now fused with the GTS & market. Streamline features that fans have been asking for such as trading on the fly, battles over Wi-Fi without friend codes, and seasons are all present. Black/ White evolve player connectivity even to the point of video chat on Dsi/ DsiXl. A great majority of the depth in these games come from these features. It will truly test all would be Pokemon Masters laughing in the face of NPCs. Pokemon will never be a lonesome experience so long as there is a Wi-Fi connection in range! The Pokemon Company has even gone as far as to step up the online solo experience for all you dreamers out there.

Launching on March 30th the Pokemon Global Link (accessed via computer) gives the user access to player stats around the world and entry into a new concept called the dream world. In it players have a chance to meet exclusive Pokemon, grow berries, and receive downloadable content for their game. Many of these wonderful features have been simplified as a touch menu on the bottom screen called C-Gear, which is fully accessible at any time during your adventure. 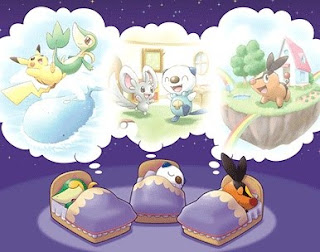 Excellent features aside some of this generation’s Pokemon look utterly ridiculous. When ice cream cones and garbage bags start becoming Pokemon, it may be time to hang up the pencil and sketch pad for a while. Thankfully you can transfer all of your Pokemon from past generation Ds tittles, but not before beating the main quest. Although a tad off putting at first when given a chance, unknown Pokemon and circumstances become exhilarating! My suggestion to everyone is play the game the way it was intended (w/o past gen pkmn in the main quest), otherwise you’ll just be ruining it for yourself.

Pokemon Black & White are the pinnacle of portable Pokemon pleasures. With the addition of seasons and tilted camera for 3D effect the games overworld looks fantastic. Battles are enhanced with moving sprites and increased speeds, but pixilation lessens the fluidity of their movement at times. Veterans and new comers alike will find endless hours of enjoyment whether it’s connecting with friends or becoming a true Pokemon Master. That’s why I (DeoGenZ) give Pokemon Black & White a 9.6/ 10

This will be an excellent game to pick up for the 3Ds when good quality launch titles are low. For more information about the games head on over to www.youtube.com/spongmario and enjoy the Walkthroughs of Black & White.