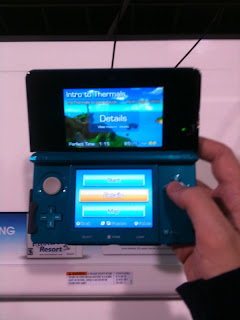 3D is definitely a very interesting and controversial technology. There was a small period of time where people praised 3D but after horrible conversions like Clash of the Titans and The Last Airbender, people are only thinking of the technology as an eye straining and headache inducing gimmick that raises the prices of movie tickets and forces you to wear glasses. People sigh and roll their eyes when a movie trailer says "in 3D". I believe the opposite. 3D is an incredibly unique innovation that lets a person view images on a screen the same way their eyes look at the world. Less than an hour as of the time I am writing this, I got to try out Nintendo 3DS. It's 3D without the glasses which in my opinion is the biggest barrier. Was I amazed? Do I think it is the future? Do I think it will make people form a better opinion of 3D? All of this will be answered in my article.

The system itself felt very nice. It was not heavy at all. The buttons felt relatively similar but the analog circle pad felt better than I imagined. It works well as I really like the rubbery texture of it. The game I got to play was Pilotwings Resort, the game I'm planning on buying alongside my 3DS in less than two weeks. Pilotwings itself is very fun and the demo really gave me a full idea of what all the modes in the game are like. There are missions where you go through rings and hoops but what I really loved is the free flight mode where you can fly around the island for two minutes trying to fly into 75 different locations. Just flying in the game and exploring the island in 3D will keep me coming back to it for a while. My only complaint so far is the controls of the jet pack which were a bit hard to maneuver but I'm sure it won't be too hard after a little practice.

Now for my impressions of the 3D. I am about to give a more in depth impression on the 3D than any other impressions I've seen. The bottom line is that it works. I had seen my fair share of 3D televisions at SonyStyle Store and Best Buy before trying out the 3DS there. It definitely was comparable to what I had seen on the 3D screens. It felt great to not wear those heavy glasses. The screen very much seemed like a lenticular lens. The sweet spot for the 3D is fairly small. Moving it slightly will produce a split second glare similar to a lectinular lens and you will lose the effect until you bring it back to the sweet spot. Nothing really popped out of the screen aside from some text but Pilotwings focused on making the screen more of a window to look into. They definitely succeeded in that regard. Wuhu Island looked amazing in 3D and I could spend hours flying over it.

And of course what makes the 3D on Nintendo 3DS special is the 3D slider which allows you to adjust the 3D effect for your eyes. I played around a lot with this. The slider turned up all the way produces the most powerful effect but the sweet spot is incredibly small. You pretty much have to keep it completely still. I also found it very daunting on my eyes. It was hard to play with the slider all the way up. I found that keeping the slider about half way produced the best effect for my eyes. The effect was still present (maybe not as much as it was when the slider was at the max), there was a much larger sweet spot, and it was much easier on my eyes. Pilotwings also looked nice in 2D but the 3D effect was much cooler. I saw no performance drop between 2D and 3D but I still have to experiment with this further to really figure it out. I played the 3DS for about 25 minutes and I'll be honest, I had a small headache on the drive home. Not sure whether it was the 3DS or the additional 20 minutes of IMAX Under the Sea 3D at the SonyStyle store (the 3DS was the last 3D I saw today)but 3D will cause these health problems. I felt really good while playing it. It was only afterwards where I started to feel ill. It was pretty minor and it did not effect my overall impressions of the 3DS.

I cannot wait for the Nintendo 3DS to come out and it really blew me away. I really hope 3D is here to stay and that the 3DS will help people form a better opinion of 3D. It definitely has the power to do that.

Update: I have gone back to play it a second time and have answered many of the questions I got as well as answered some of my own questions. As to how motion controls and 3D could work, I found that moving the 3DS vertically (up and down) still kept the 3D effect but moving it left and right is going to be a potential disaster. I'm guessing some of the AR games will be fine in 3D but games like Face Raiders might not keep the effect so well. The 3D effect with the slider up to the max felt a bit better this time but again, I found it much easier to play with the slider about half way. The effect is noticeably less as the slider is moved down but thankfully it is not a major difference, even as the slider is the furthest down it can be before going into 2D. Again, no major difference in game performance between 2D and 3D. Last but not least, no health problems this time around. Maybe it's a little harder for me to focus my eyes on stuff for the time being but that really is not a huge problem. I only played fifteen minutes versus the twenty five I did yesterday but even still, I pretty much proved that the 3D effect will take some getting used to. Pilotwings is still fun and the game and the 3D effect looks amazing.

oh so its good but yeah what I'm worried about is the fact that u cant move the 3ds or the 3d effect will be affected, another thing is the battery life but u obviously couldn't test that, I'm still looking forward to it but I will not get on day 1 just to make sure I dont waste my money or anything

Well I don't know about the 3d effect but i do know that there is a solution to the battery life of the 3ds.
(http://www.1up.com/news/3ds-battery-life-problems-solved)

As per the other bloggers, it's also preferable to stick to the 3DS in their dark colors. Aqua Blue gave some noticeable problems because its color was competing with the 3D effects for your eyes' attention. Apart from that, this is one little stop that did a major impact on the gaming industry and on 3D media itself. If the 3DS was able to pull off an eyeglass-less 3D, then much is to be expected in its iteration.