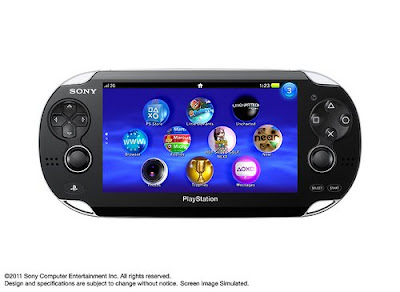 Last night, Sony held a press conference to announce their next big thing. That thing is Sony's Next Generation Portable. Next Generation Portable or NGP is the codename for the successor to the PSP. It is loaded with new parts inside including a 4 core processor (making it close to the power of PS3), not one, but finally TWO analog sticks, Sixaxis motion controls which include an accelerometer, gyroscope, and electronic compass, a 5" OLED screen that is capable of HD graphics, a front camera and rear camera, GPS, Wi-Fi and 3G antennas built in, and not to mention, that 5" OLED screen is also a capacitive multitouch display along with a 5" multitouch pad on the back of the system.

Games will be distributed via digital download or through flash based cards. NGP will have trophy support, support for PlayStation Suite, a special store for PlayStation games on Android devices also announced at the event (not to mention it is backwards compatible with all PSP content on the PlayStation Store), an application called Near which lets you see where your friends are as well as what the people in your area are playing, and much more.

Many games were announced and a few were shown off. Sony showed off a new Uncharted game which has the player swiping the touch screen to make Drake automatically jump or swing from vines. Swinging the NGP also makes Drake swing from vines. Another game called Little Deviants uses both the touch screen as well as the rear touch panel to change the terrain within the game. Many other incredible Sony franchises will also be coming to NGP including Killzone, Resistance, LittleBigPlanet, Wipeout, Hot Shots Golf, and more. The only third party game that was officially announced was a Call of Duty game from Activision. Demos of Lost Planet 2 cut scenes running in real time on NGP and well as Hideo Kojima showing off a tech demo featuring Metal Gear Solid 4 running on NGP were shown.

NGP will be releasing this holiday season in Japan for an unannounced price for now but expect it to come everywhere else in early 2012. Stay tuned for GamersCast for continuing updates on all things gaming.