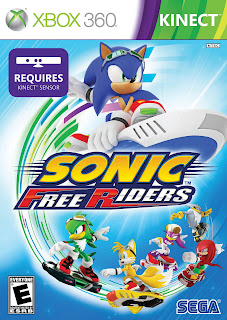 Kinect’s launch lineup is filled with a fairly small variety of games. There are sports games, fitness games, dancing games, and racing games. Sonic Free Riders from Sega is one of the few racing games that launched with Kinect. Is Sonic the Hedgehog’s first Kinect title worth playing or should Sonic just stop trying?

Sonic Free Riders is the third game in the Sonic Riders series. The racing game has Sonic and his pals riding hoverboards and motorcycles known as Extreme Gear as they collect rings and various items to attack opponents as they speed towards the finish line. Surprisingly, there is a lot of depth to this title that is rare to see in launch titles. Free Riders is heavy in content from four Gran Prix story lines, sixteen different track variations, multiple game modes and offline as well as online multiplayer. There is definitely more to chew on in Sonic Free Riders than most Kinect games available. Getting into just about everything this game has to offer can take a lot of time.

The gran prix modes feature your favorite Sonic characters competing to be better than the rest. Team Sonic, Team Babylon, Team Rose, and Team Dark are in deep competition. The storylines are all connected but always makes the team you are playing as the winners. The cutscenes look like they were added at the last minute with just pictures of characters with very few animations. At least the voice acting is slightly better than what has been seen in past Sonic titles. There are 10 missions in each team which involve grabbing rings, grinding on rails, and racing. The first nine missions for each team are relatively easy but the difficulty spike goes up way too much for the tenth mission which at times can feel impossible compared to the previous missions. 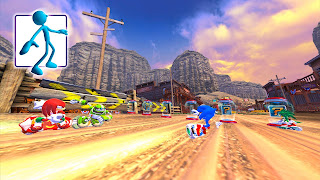 Racing in the game is very fun. Learning each map and learning to use each gear part which can be equipped to your Extreme Gear can take some time which makes you want to keep playing. Gameplay can also change within each map so you can be swimming or operating a mine cart which changes the way you can play and the way you move your body. There are so many different controls to be learned but most of them are self explanatory, especially with items. It is pretty amazing how many different gestures and control Sonic Team implemented so early in Kinect’s lifetime. As cool as they are, the controls were also one of the biggest problems I had with the game. Turning is sometimes not as easy as it seems. It can be difficult plenty of times. The game also had trouble registering whether or not I was leaning forward to make a large jump when on the hoverboard. Calibrating before each and every race is also a pain. These setbacks can be easily overlooked as you get better acquainted with Free Riders.

Sonic Free Riders is a nice looking game. It’s great use of lighting and animation definitely makes it one of the best looking Kinect games around. The voice acting as I said is definitely better than what has been seen in most Sonic games. Tails actually does not sound like a girl! The only complaint about voices is that characters will sometimes say things out of context. When you win, your character may be saying something that was meant to be said when you would lose. The main menus can also take a while to navigate and the flicking gesture that you must use sometimes does not do what you want it to do. Voice commands help but they don’t always work.

Multiplayer is also another whole mode. There are offline modes as well as online. Both are very fun and bring even more value to the game. Free Riders is definitely a fun game to play with friends and family.

Thanks to Sega for providing us with a copy for review!