Though, the title states that a Wii 2 is coming in 2007, there is also a bit of news about the current Wii in this post as well...

1st off, Nintendo revealed what their Wii Point Cards will look like, check it: 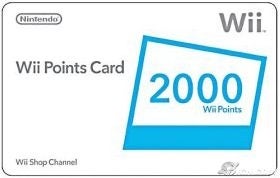 CNN announced that it will be providing the news feed for the Nintendo Wii's News Channel, as their slogan states they are, "The Most Trusted Name in News"(personally I prefer the Today Show on NBC).

It has also been revealed that Nintendo wanted to sell its console at $199, but due to the competition, they felt forced to raise it, so we can expect a price drop pretty early on (my guess is around May 2007).

Nintendo of Japan is expected to be releasing a Wii 2 next year, which is capable of DVD-Playback, generally because of "peer pressure" (wow, Nintendo gives into peer pressure...), but no other features on the upgraded Wii have yet to have been released, but personally if you have to wait another year just to get DVD-Playback, then it ain't worth it.
Nintendo of America quickly commented after this announcement stating the following:

"In Europe (and the Americas), we have no plans for a DVD option either
internally or as an accessory at this time. DVD players are now sold so cheaply
and the penetration rate is so high that we did not think it was worth including
[DVD playback] and raising the price of Wii."